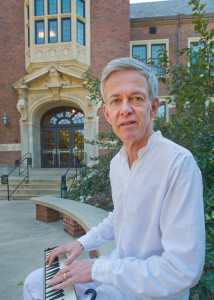 David Vayo is a composer, keyboard performer and improviser. For his compositional work, he has received awards and commissions from the John Simon Guggenheim Memorial Foundation, ASCAP, the Koussevitzky Music Foundations, the Barlow Endowment for Music Composition, the American Academy and Institute of Arts and Letters, the American Music Center, the National Association of College Wind and Percussion Instructors, and the Illinois Council for the Arts, and has been granted numerous artists’ colony residencies. Close to 500 performances and broadcasts of his compositions have taken place, including recent performances in Mexico, Taiwan, Japan, South Korea, and Spain and at the universities of Wisconsin, Iowa and Utah. Festivals which have programmed his work include two International Trumpet Guild festivals, the International Trombone Festival, the International Double Reed Festival, the Grand Teton Music Festival, and three World Music Days of the International Society for Contemporary Music. Vayo’s compositions are published by Honeyrock, Bèrben/Italia Guitar Society Series, and the International Trombone Association Press. As a keyboardist, Vayo performs on piano, synthesizer and keyboard harmonica, and is especially interested in contemporary concert music, jazz, music outside of western European traditions, and free improvisation.

Vayo holds an A.Mus.D. in Composition from The University of Michigan, where his principal teachers were Leslie Bassett and William Bolcom; his M. Mus. and B. Mus. degrees are from Indiana University, where he studied with Frederick Fox and Juan Orrego-Salas. Vayo is the Fern Rosetta Sherff Professor of Composition and Theory, Emeritus at Illinois Wesleyan University, where he taught composition, improvisation and contemporary music and served as Coordinator of New Music Activities. He has also taught at Connecticut College, the National University of Costa Rica, and the Youth Program of the National Symphony Orchestra of Costa Rica.