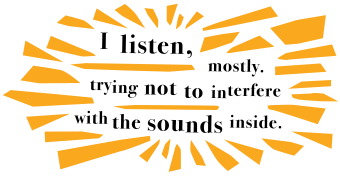 A series of pieces for keyboard harmonica; original synthesizer patches for improvisation to accompany various weather and light events.

Two performances of Vayo’s music have been postponed due to the coronavirus pandemic:

The audience-participation piece Chambers, scored for viola, percussion, electronic keyboard, conductor and audience, was originally scheduled for March 20, 2020 by the new music ensemble of the University of North Carolina at Greensboro.

Adult and Child, a setting of five poems in Japanese by Kijima Hajime, was to be premiered in Tokyo on May 2020. The piece is scored for mezzo-soprano and baritone voices, koto, and harpsichord, and was composed for harpsichordist Michiyo Honma.

The Statue of Zeus at Olympia, for tuba, percussion, recorded sound and video, part of tubist Josh Biere’s Seven Wonders of the Ancient World commissioning project, will be premiered in spring 2022 at the University of Wisconsin, Madison.

Vayo’s most recent projects include Four Ways to Be Human for orchestra of Chinese instruments, and Returning for keyboard harmonica and hammered dulcimer, the latter written in memory of the composer’s father.

The premiere of Songs of Ourselves for two trombonists, two percussionists, pianist and baritone, Vayo’s first collaboration with Ohio Poet Laureate Amit Majmudar, took place on October 27, 2019 at Dickinson College in Carlisle, PA. The work was composed for baritone James Martin, who sang the premiere.

Mezzo-soprano Lisa Neher performed Vayo’s humorous theater piece Tell Me What You Think of Me: A Monodrama in Twenty-Six Letters at the University of Nebraska at Kearney on September 27, 2019.

On March 30, 2019 at the University of New Mexico, the national conference of the Society of Composers included a performance by the Boston-based ensemble Sound Icon of Vayo’s Chambers for viola, percussion, electronic keyboard, conductor and audience.